INFORMATION TO THE MARKET

For all São Paulo-based non-members of CitrusBR, we estimate a total processing volume around 30,700,000 boxes of oranges of 40.8 kg in the 2017/2018 season, an increase of 88.3% over the 16,300,000 estimated in the previous period. The average yield on fruit estimated for these companies is around 296.7 boxes of oranges required for the production of one ton of FCOJ equivalent, an improvement of 2.1% when compared to the 303 boxes required to produce one ton of FCOJ equivalent in the previous season. Assuming these figures, CitrusBR estimates a total juice production around 103,472 tons of FCOJ equivalent for non-CitrusBR members, a 91.8% increase when compared to the 53,935 tons produced in the previous season.

SUPPLY AND DEMAND / NEXT SEASON

Based on an individual and confidential data compilation carried out by an independent auditing firm, the Brazilian Association of Citrus Exporters (CitrusBR) reestimates the worldwide inventories of Brazilian orange juice for June 30th 2018 to be 305,986 tons of FCOJ equivalent 66 brix. The forecast represents a 20.3% increase when compared to the projection from february 2018, when the forecast was at 254,200 tons for the same period.

With a fruit production estimated by Fundecitrus at 288,390,000 boxes of 40.8 Kg in the 2018/2019 season, considering a fresh fruit Market around 40,000,000 boxes it is reasonable to estimate a fruit availability for processing around 243,390,000 boxes for São Paulo-based companies who are members and non-members of CitrusBR.

Although the dry weather of the last 70 days favours an improvement in the industrial yield on fruit, data presented by Fundecitrus on May 9th showed that the regions of the Minas Gerais Triangle, Bebedouro, Votuporanga and São José do Rio Preto present crop decreases between 45 and 54% when compared to the previous season, influecing the average total yield on fruit due to the fruit mix from different regions, with a higher proportion of varieties produced in the southwest of the state, with lower industrial yield in comparison to the fruit produced in the regions affected by the dry weather.

In order to better inform the Market, and considering variables such as the total fruit supply for processing, total exports volume , domestic market consumption  and industrial yield on fruit, CitrusBR believes inventories of orange juices projected for June 30, 2019 may vary within an interval from 56,000 to 155,000 tons, following the assumptions above and according to the table below:

[2] Consumption in the Brazilian domestic Market as reported in the Markestrat report based on Euromonitor and Tetrapak data, not considering production estimated in markets outside of the state of São Paulo; 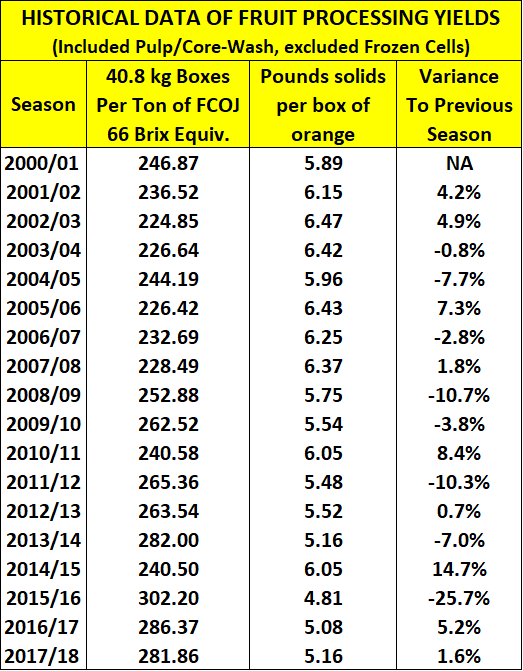 Graphic 01: Variation in number of fruits per tree at stripping by region 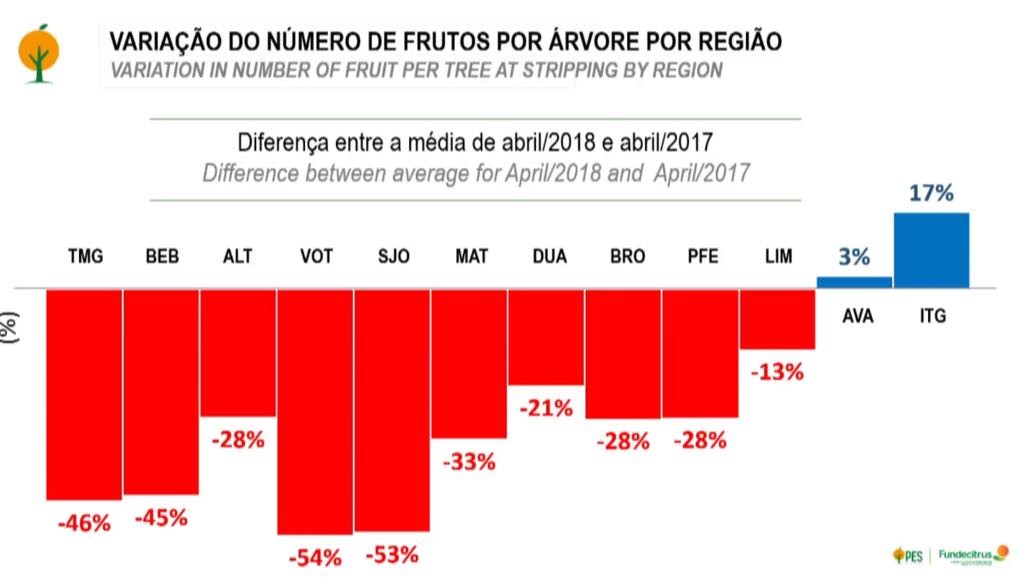